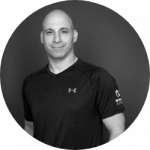 Expert Training, Knowledge, and Inspiration to Live Your Best.

Jason Pulido, a co-owner of Nimble Fitness in New York City, began working in the fitness industry in 1996 as a Personal Trainer at Crunch Fitness. He quickly developed into one of the top trainers in the company, eventually being promoted to Personal Training Manager. Jason proceeded to develop and systemize the training program at Crunch, implementing methodologies, procedures and development programs that were used throughout the company. At the age of 26, he became the National Director of Personal Training for Crunch, which led to his eventual role as Vice President of Personal Training.

Jason brought his experience, enthusiasm and expertise to the Nimble team in January of 2010. In 2013, Jason joined the ownership team at Nimble Fitness, bringing a wealth of energy and insight into his new responsibilities. As a trainer, he works to consistently take his functional training to the highest level with Nimble’s clients. He loves incorporating functional tools such as TRX, Kettlebells, BOSUs and VIPRs into his high(er) intensity workouts, and mixing in Boxing or Kickboxing for those that are interested. Jason’s currently involved in expanding the Nimble brand and helping to develop Nimble’s Company Wellness programs.