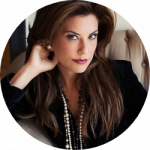 Amanda Sanders is the senior stylist at NewYorkImageConsultant.com, a New York-based image and wardrobe consulting company that styles men and women, and has had both a private and celebrity clientele for nearly 15 years. Aside from image consulting and working with celebrities such as Chris Rock, Wanda Sykes, and Gwyneth Paltrow, Amanda is also a TV personality for Bravo TV. She has appeared on the show ‘Love Broker’ as the stylist and image consultant, and was also featured on the sixth season of ‘The Real Housewives of New York City’.

Amanda has styled the biggest names in Hollywood and designed costumes for countless blockbuster movies and hit TV shows. She has done photo shoots and been quoted in publications such as GQ, New York Post, Wall Street Journal, New York Times, Forbes, CNN and more.

Wanting to provide the same level of in-depth and personal assistance to non-celebrities, Amanda eventually branched out into image consulting. For the past decade, she has brought her unique skill and knowledge to all kinds of people. As a result of her direct and cut to the point approach to styling, she earned the nickname “Demanda” as well as won rave reviews for not only meeting the needs of her diverse clientele by going above and beyond. From instilling effortless confidence to providing everlasting fashion input to the public, Amanda Sanders is a premier image consultant and celebrity stylist.

Her most current project is a jewelry line that she is collaborating with and launching through BlingJewelry.com. This collection will feature Amanda’s favorite jewelry styles worn on ‘The Real Housewives of New York City.’

Amanda’s other credits as a costume designer and wardrobe stylist include various television series such as: