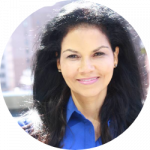 Publications that have posted Juliette's articles include the Wall Street Journal, QSR, The Street, the New York Times, Reuters, Yahoo, Business Insider, Forbes, Realtor,
MainStreet, Variety, the Hollywood Reporter, Commercial Observer and many more. She is a graduate of Columbia University's Graduate School of Journalism and a member of the American Society of Journalists and Authors (ASJA) and the Association of Ghostwriters (AOG).