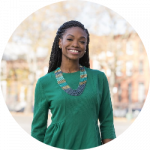 Fitness For The Dancer In You

Born in Rock Hill, South Carolina, Laci Chisholm has been dancing nearly as long as she has been walking. A gifted and outgoing child, Laci’s desire to express herself has driven her passion for dance and given her a remarkable creative outlet. Laci studied dance intensely throughout her adolescence perfecting her craft and developing her ability to share the skill of dance with others. With a strong performance background Laci has studied several genres of dance including African, Jazz, Dancehall, Haitian, Hip-Hop, Salsa, Soca, and Tap. While attaining her undergraduate degree at the University of North Carolina at Chapel Hill Laci never lost her zeal for dancing. She was the principal dancer of Opeyo, her college’s Hip-Hop dance team. In addition to performing with her collegiate dance troupe, Laci took a serious interest in sharing her love of dance with others. She nobly founded an after school hip-hop dance class for students due to a lack of resources in the community. Having had such success in building relationships with children through dance Laci assumed several positions after graduating where she was responsible for choreographing and teaching both competition routines and recital pieces respectively for Cheer America and the Academy for Performing Arts in North Carolina.

Laci moved to New York City in the summer of 2006. She studied with the Hip Hop Dance Conservatory for a year and has performed at the legendary Apollo Theater and on the Rachael Ray Show. Though she loves to perform, Laci found her calling in education, receiving her Masters of Science in Education from Hunter College and has spent most of her career in that field, though dance was never far from her heart. She started Fit4Dance in 2014, with the intent of providing fun, challenging, and effective dance fitness classes to beautiful women across New York City. She opened her very own storefront in February 2016, accomplishing her lifelong dream. Being in her own space has allowed her to expand and offer a variety of formats including the ones which have helped her maintain a healthy, fit,body.

Laci is a certified Zumba instructor, a graduate of the Shape-Up NYC Instructor Training Program, a certified ACE group fitness instructor, as well as a current member of Kriye Bode, a Haitian Dance performance troupe. Laci truly believes that dance has the ability to elevate the spirit, focus the mind, and center the body. This belief is evident in her high energy classes where her infectious smile and encouraging words will almost make you forget you're even exercising!