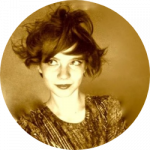 As a young girl, Emma constantly asked her mother “Can we make a film today?” The usual overwhelmed response was “Go make a storyboard first.” Since then Emma’s dedication to the details of every frame have paid off and her short films have premiered at venues including NYC’s MOMA, Lincoln Center and The TriBeCa Film Festival where she won the “Best Experimental Film” Award for her split screen dance film "Le Vol de Solange.” Her latest short “Head Space” debuted at Hollywood’s Chinese Theatre and as a Student Academy Award film finalist, continues to travel the world with screenings in London, Malta, Kiev, Geneva, Italy, Hong Kong and LA Live. Always seeking other creative artists, Emma has collaborated with fashion designer Jussara Lee as well as grammy-nominated composer Stephen Gaboury. Her experiences as a dancer (NYC company Ballets with a Twist) and funk trumpet player allow elements of rhythm, sound, and tempo to infuse her work. A recent graduate of USC School of Cinematic Arts, Emma likes to travel between LA, her hometown NYC, and around the world making films!