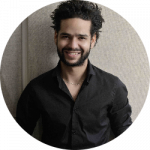 All lessons can be online via skype or at home.

Known for his, musicality, sensitivity and innovative drumming, Ayman has
found a unique musical voice as a result of his passion for jazz and his natural
Tunisian folk music. The New york based artist has been playing with
countless stellar jazz artists and Grammy winners from allover the globe, his
reputation has steadily grown with every performance and he is rapidly
becoming one of the most brilliant drummer composer of his generation.
Ayman's love for music has taking him across the world including Europe and
Africa where he begin constantly touring in his early twenties and India,
where he studied Indian percussions with the legendary Dr. Ghatam Karthick
and toured across the country with the prestigious Splendor of Masters
alongside Vishwa Mohan Bhatt, Shubankar Banerjee and Prasanna. Few
years later, Mr Boujlida has moved to New York City where he is currently
based after he graduated from the prestigious New School for Jazz and
Contemporary Music with a strong merit scholarship.
Ayman has been leading his band in several prestigious Jazz Festivals around

the world as well as winning several awards including the AFAC 2016 com-
posers award. He has appeared playing as a drummer, pianist, konnakol

vocalist and a multi hand percussionist in stages such as Reykjavic Jazz
festival, Carthage international festival and Dubai Jazz festival.