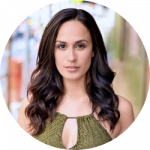 Dailyn Santana was born and raised in Elizabeth, New Jersey. She fell in love with the Theatre at a very young age. Her first experience on stage was when she was cast in Neil Simon’s “Brighton Beach Memoirs.” She played Eugene Morris Jerome because no boys wanted to participate in the play. As fate would have it, Dailyn was a huge tomboy and was perfect for the role. She embraced the part of the Yankees-loving boy and was hooked since the start of her opening monologue. She then began participating in every play and talent show in school she possibly could. She is a recent graduate of the prestigious Neighborhood Playhouse School of Theatre. Since graduation, she booked a national commercial and an ad campaign for Slimfast and booked a Curious George app commercial. She will also be seen in several independent films such as “New Endings” by Diana Espinosa and “Payin’ the Price” by Jordan Coleman.

Apart from having extensive credentials in acting, she also has hands-on experience as a personal assistant and a Zumba instructor.