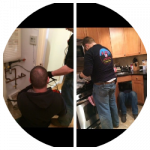 My families history in the plumbing trade goes back over 110 years. My great grandfather opened up a plumbing company nearly 105 years ago and it is still in business today. I began in the trade when I was 15 years old working at a plumbing supply. At age 18 I became an apprentice and completed my 5 years of schooling to become a journeyman plumber. Through my tenor as an apprentice and journeyman I worked on many different projects including the Marriot Hotel at JFK Airport, The Air Train at JFK airport, The Bronx County Courthouse and The National 9/11 Memorial and Museum. I was also involved in a housing project where over 5,000 Kitchens and Bathrooms were gutted and remodeled. In January 2011 I decided it was time for me to go out on my own and pursue the American Dream.